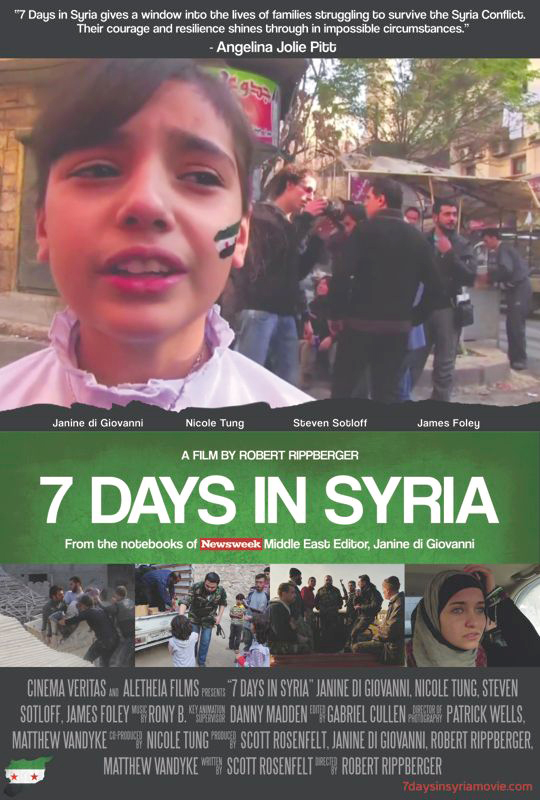 In 2012 Newsweek Middle East editor, Janine di Giovanni, submitted a proposal to cover the war in Syria. The magazine denied the request, deeming the situation too dangerous. She decided to go anyway.

Over the course of seven days, Janine travels through the Syrian war zone, bringing viewers along to share the experience. One moment a young girl is melodically singing in the marketplace and the next...a loud explosion and she disappears from view as the image shakes. Conditions are extreme with constant shelling and bombardment, threat of sniper fire, and kidnappings. And in the midst of all the chaos, there are the Syrian people. Janine meets a carpenter—turned-baker, a man considered to be a hero of Aleppo who makes bread to keep his neighbors alive. Then there's Waad, a Syrian teenager studying economics until the university was bombed. She documents injuries and deaths of soldiers and civilians for posterity and war tribunals. SEVEN DAYS IN SYRIA shines a light in one of the darkest places on earth.

A film by Robert Rippberger [One Hour]

1.  Non-commercial Public Performance License for Non-Profit Organizations and Small Community Groups - 1 Screening ($150 USD).  This license grants the bearer 1 public performance screening of the film where admission is not paid.

2. Non-Profit/Educational License with Public Performance Rights ($295 USD) This license grants the bearer 5 public screenings in the same venue and the right to use the film in a classroom or other educational setting in that same venue in perpetuity.

4. Commercial Public Performance License for Non-profit, Festival or Independent Theater - Multiple Screenings, up to 5 ($500 USD) This license grants the bearer up to 5 public screenings of the film where admission is paid.

5. Educational K-12 Classroom Edition (for K-12 classroom use or home viewing only) ($95 USD) - This license grants bearer the rights to screen the film for classrooms of pre-University students ages 5-18. This license is NOT a public performance license.

6. If you’re a corporation, please contact simplecinema@rocofilms.com with the details of how you’d like to show the film — please include screening location(s), expected audience size, and number of screenings.

There are no subtitles currently available.